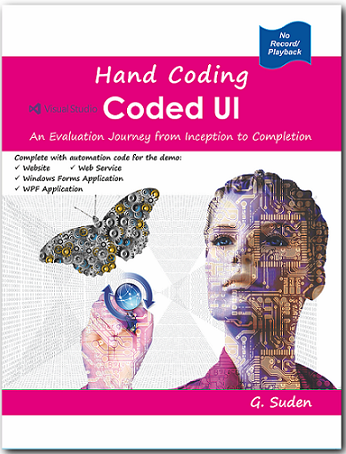 This book is aimed at testers who want to try their hands at automated testing using Coded UI, which is available as part of Microsoft® Visual Studio® (Enterprise Edition). Coded UI has empowered developers and automation testers to work using the same automation tool and language, hence enabling them to collaborate more eﬃciently and eﬀectively. Moreover, Coded UI can be used for both Web and Windows-based Applications which enables automation testers to devise a single Automation Framework that reuses common code and libraries. This makes the test automation more eﬃcient, reduces the test automation eﬀort, lowers the cost of maintenance and also provides a higher Return On Investment. Therefore, in my view, if you are planning to use Coded UI for automation, it will be a right step forward in your world of automated testing.

You will find a lot of books which go through mainly the theoretical aspects of automation and provide only a few code snippets on how automation is performed in reality. There is a famous saying ‘‘In theory, theory and practice are the same. In practice, they are not’’, so I thought I should write a book which explains how automation is practically done rather than just explaining it in theory. Moreover, I’m a big fan of hand coding the test automation code as opposed to using the auto generated Record and Playback code. This hand coding approach can be applied to any project which aims to use Coded UI as the test automation tool.

This book provides a step by step guide that will teach you how to setup the Automation Framework from scratch using Coded UI. As mentioned before, the book concentrates on the ‘practical side’ of automated testing rather than the ‘theoretical side’. It includes complete listings of the hand coded automation code for the demo Website, Windows-based applications (Windows Forms and WPF Applications) and Web Service that have been developed for you to test against. The code listings explain the logic of individual tests, repositories and generic functions.

This book is divided into ten chapters as follows:

Since this book has been designed to be a Practical Oriented Approach, we will adhere to the following steps in each section of a chapter (wherever applicable):

Welcome to the world of hand coding your Coded UI tests!